All About That Sockeye - Plus An Arctic Char Recipe

Salmon have a ton of variety and a curious lifestyle. They come back to their home stream to mate at the end of their life cycles and swim in other bodies of water in between. Sockeye salmon particularly is one of the most popular varieties you’ll find in Victoria, due to it’s versatility and deliciousness! You can bake it, broil it, grill it, or poach it, making this type of salmon perfect for all kinds of different recipes.

Arctic Char is a favorite of tourists and local Victorians alike and is similar to salmon, but with its own unique flavor. Read on to find out more about both of these fish, where to find them, and how to cook them.

The Life of a Sockeye Salmon

Sockeye are also called red salmon, kokanee salmon, or blueback salmon, but whatever you want to call them, they are all fantastic to make dishes with. The vibrant red of a sockeye is used often in a poke bowl or for sashimi, but grilled or baked is also delicious.

Sockeye salmon start out a blue/grey colour with little black spots on their bodies. They are an anadromous fish, which means that they spend part of their lives in freshwater and part of their lives in the ocean. They spend approximately 1-3 years in the freshwater near where they were spawned, and then go out into the ocean to eat and grow during the “smolt” stage.

After the smolt stage, sockeye salmon spend about 2-3 years in the ocean, sometimes up to 4-5 years. When males are ready to spawn, they undergo several changes; they can be seen with humped backs and tiny teeth visible over a hooked jaw. They then turn red when they return to their home streams to spawn.

The lifecycle of the sockeye salmon is such that they die shortly after spawning. First, the females dig nests in the riverbed where their eggs are deposited, and then the males swim over the nests and fertilize the eggs. The females cover the eggs with gravel from the riverbed, and then the salmon are hatched in the winter, and the cycle begins again!

When salmon come to their home streams to spawn and die shortly after, their carcasses provide important nutrients to the river beds where they spawned. They are also a source of food for many wildlife, including bears who grab them out of the water as they make their way upstream, and eagles which are often seen diving and grasping a fish in their talons as they fly away.

In Victoria, people's salmon fishing season starts in June and goes through September, but they can generally be caught year round. Since salmon spend a large portion of their lives in the ocean, they can be found in many places, which means we can often have delicious fresh sockeye to offer!

The Arctic Char of Northern Canada 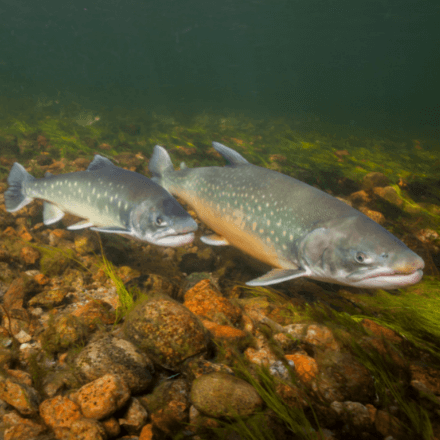 The Arctic char isn’t a trout and it isn’t a salmon, though it is related, and it tastes somewhere in between. These fish can be seen in many different colours from silver all over to blue/green, and even some pink to red. Similar to salmon, the colour doesn’t affect the taste. No matter the look of the Arctic char, they all have the same unique flavor to their breed.

Char flesh can vary from light pink to red depending on season and feeding. The flesh is pleasingly flaky and, although light in texture, it also has a little of the oiliness of salmon, making it a more satisfying choice than trout.

Arctic char is famous with the Inuit and they’ve used this fish for hundreds if not thousands of years. Aside from Iceland, Northern Canada is the biggest supplier of Arctic char in the world.

Arctic char are caught by fly fishing. People that are looking for an authentic fly fishing experience in Northern marine waters often seek to catch Arctic char. Experienced anglers know where to go and which flies to use to attract Arctic char but if you’re someone hoping to have a similar experience, you can learn from the locals too.

As for preparing this fish, you could eat it straight from frozen like the Inuits reportedly did, or you can try our recipe for this unique fish.

Preheat the oven to 375 degrees. Line a baking sheet with nonstick aluminum foil or parchment paper. Place the arctic char on the baking sheet skin down.

In a small bowl mix the dill, lemon juice, salt and pepper. Spoon over the char and rub it in as evenly as you can.

Bake for 15-20 minutes until it flakes easily with a fork. Cut into four pieces and serve with a lemon wedge.

Skip the Dishes and Try Our Sockeye Lox Sandwich

Salmon is so versatile with all the ways you can prepare it and sockeye salmon is one of the easiest to prepare. When you’re on the go this summer and still in the mood for some quality takeout, Oak Bay Seafood has you covered. Try the Sockeye Lox Sandwich to get your favorite sockeye flavor in a handheld ready to go takeout option.